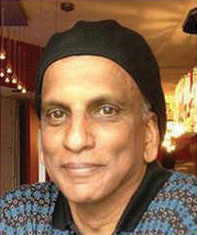 When I first came to SDSU, I noticed the lack of LGBTQ research as it applies to Muslim communities. I therefore designed and taught a course in Muslim sexuality.  I later wrote the foreword to the book, The Trouble with Islam, authored by Irshad Manji, arguably the world’s most famous Muslim member of the LGBTQI  Muslim community.

My most recent publication was “When Certainty Becomes Immaterial,”  in Encountering the Stranger, edited by Leonard Grob and John Roth. This book was the result of a conference held at the Holocaust Museum in Washington D.C., where interpretations of scripture were studied. My article dealt with the exegesis of the shared story of Sodom and Gomorrah in the Abrahamic religions.

I have given several academic presentations on the issue of LGBTQI material within Islam, and most recently attended a conference in Capetown, South Africa, where I presented the methods of arguing against the fundamentalist interpretations of proscription.  A long term project I have is to prepare a work showing the occurrence of LGBT relations among earlier Muslims.  Incidentally the transgender concept has long been within Islam, and was even more acceptable than the idea of homosexuality. The reason for this was that, supposedly, Ali, the fourth caliph was presented with a case of an intersexual person and ruled that despite the outward appearance of a female, such a person should function as a male.