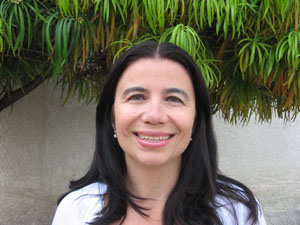 I grew up in Nicaragua, the daughter of a Nicaraguan man and a white U.S.-American woman.  As a child I lived through the last years of the right-wing Somoza dictatorship, the leftist insurrection of 1978, the Sandinista revolution of 1979, and the Contra war of the early 1980s. After graduating from Oberlin College in 1990 I went on to become the first Nicaraguan woman with a U.S. Ph.D. in Latin American History and a pioneer in the field of Nicaraguan women’s history.  Since 1999 I have lived in Southern California.

My research addresses gender and sexuality in Nicaragua and along the U.S.-Mexico border, the two places I call home.   As a historian, my goal is to document the nuances in the experiences of those I study, in order to create a more accurate rendition of the past.

My work deals extensively with LGBT histories and ethnographies, addressing the issue of social justice as a central concern.  For two years I worked as a bilingual ethnographer for Trayectos, an NIH-sponsored project that addressed HIV risk among Mexican immigrant men and their partners in San Diego.  After co-editing one book on right and left-wing women in Latin America and writing another on the history of first-wave feminism in Nicaragua and its cooptation by the Somoza dictatorship, I have focused on documenting Nicaragua’s LGBT histories.

A forthcoming article in the Journal of Lesbian Studies tells the story of Carmen Aguirre, (1931-1971) a young woman who lived as a self-made man in the 1960s  under the brutal, yet populist, Somoza dictatorship.  Carmen, a Somoza supporter, was known as la Caimana (the alligator woman).  La Caimana’s story reveals that, in certain contexts, particularly in the absence of a viable feminist movement, sexual outlaws can help uphold stringent gender dichotomies and simultaneously contest heterosexual dominance by transforming these dichotomies.  La Caimana’s life also reveals some of the complexities of the Somoza regime.

I am currently working on several other articles and one co-authored book that document Nicaragua’s twentieth and twenty-first centuries LGBT histories.  The book argues that sexuality has been a central concern of elites in their attempts to exert control over their fellow Nicaraguans, it explains why male homosexuality has been of such concern to elites, the circumstances under which lesbians have become the focus of elite anxiety, and how global and Nicaraguan politics interacted to produce an attempt at LGBT organizing in the 1980s, and a successful LGBT movement during the first decade of the twenty-first century.

I am also working on a project dealing with LGBT histories on the border.  I am co-authoring a piece on immigrant drag queens in San Diego’s working-class Mexican communities.   The article contends that Mexican immigrant drag queens are active participants in the constant re-creation and performance of Mexican culture and identity in the United States and are central to its continuous transformation.  Moreover, the shows we studied, which are aimed at working-class Mexican immigrant heterosexual audiences, have the potential to heal family and community relations damaged by homophobia, racism, and poverty.