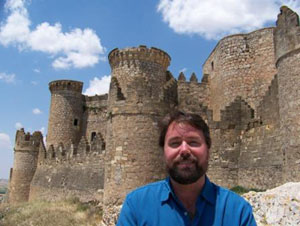 Mathew Kuefler (Professor of History at SDSU) is a scholar of premodern European sexuality.   He has published a book on masculinity and gender ambiguity in late Roman antiquity, titled The Manly Eunuch.  A second book, The Boswell Thesis, examines the controversial claims made by Yale historian John Boswell (where Kuefler also received his PhD and with whom he studied) about greater tolerance of homosexuality in early and medieval Christianity.  Kuefler has also published articles on castration and eunuchs in late antiquity and the middle ages, on male friendship and the suspicion of sodomy in twelfth-century France, on the survival of ancient pederasty into the early middle ages, on marriage in later Roman law (including laws on same-sex marriage), on sexual desire and the body in early Christian writings, and on Saint Augustine’s confessions of homoerotic attraction. He has recently been invited to present his research at the Sorbonne in Paris, at the University of Padua in Italy and at the University of Zurich in Switzerland.   For ten years, Kuefler was also editor of the Journal of the History of Sexuality, the leading journal in this field and which publishes broadly on LGBT history as well as on other topics.  He has also edited a textbook for classroom use, The History of Sexuality Sourcebook, which ranges globally from earliest human history to the present.  Currently he is beginning research on the many paired same-sex saints venerated together in early Christianity and the middle ages.