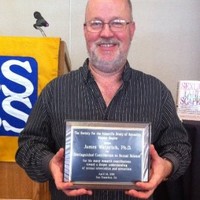 I've been doing LGBTQ research in psychology and biology ever since my Ph.D. thesis, half of which was about an evolutionary explanation of homosexuality. (The other half was about social class differences in sexual behavior among heterosexuals.)

After getting my Ph.D. in biology, I received a Junior Fellowship at Harvard for the next three years, where I elaborated the theories I had written about for the degree. I also ensured, via a calm but upfront demeanor, that the new biological theories of sexual orientation variability would not be phrased in a way that would jeopardize the gay movement.

Then I moved to Baltimore to work in the Psychohormonal Research Unit at Johns Hopkins, where I acquired some clinical skills (especially interviewing). I also met some of the most sexually diverse people on the planet -- another lesson in anti-stereotyping.

Moving back to Boston, this time to Boston University Medical School, I worked with the Family Studies Laboratory to resurrect a partly-completed study that ended up showing that homosexuality runs in families.

Following the grant trail, I moved to San Diego and UCSD, again in the Department of Psychiatry. Working for Igor Grant, I was the Center Manager (along with other roles) for the first 10 years of the HNRC (HIV Neurobehavioral Research Center). Although this multi-million-dollar NIMH grant revolved around neuropsychology, not sex research per se, I was able to insert some LGBTQ-related items into the general protocol.

This life-long scholarly interest in sexual orientation brought me to the attention of the Journal of Bisexuality, which hired me to become their editor in April, 2011. The journal is highly interdisciplinary, and I feel uniquely blessed to be able to draw on my research experience to get new, scholarly, interesting research created inside the ivory tower, and then out into the world at large.